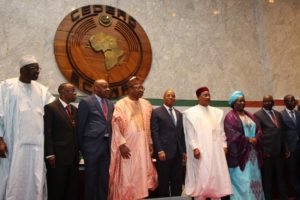 Abuja, 5th September 2019. The Chair of the Authority of ECOWAS Heads of State and Government and President of Niger, H.E Mahamadou Issoufou, met with the senior management of the ECOWAS Commission and Institutions in a bid to advance, in all ramifications, the course and implementation of regional integration projects.

Conferring with the President of the ECOWAS Commission and Heads of Institutions on the 5th of September 2019 in Abuja, Nigeria, President Issoufou stressed the importance of meeting with those responsible for the effective implementation of the decisions taken at Summits of Heads of State and Government.

President Issoufou emphasized that it was important “to learn about the state of implementation of the major integration projects and to note the progress and challenges to be met in order to achieve ECOWAS’ objectives” since the objectives aim to improve the living conditions of the approximately 380 million inhabitants of the ECOWAS region. 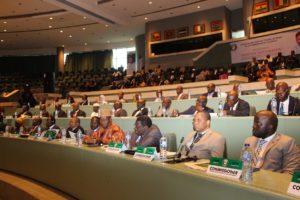 The ECOWAS vision 2020, he remarked further, is meant to help realise “a borderless, peaceful, prosperous and coherent region, built on good governance and where people have the capacity to access and exploit its enormous resources through the creation of opportunities for sustainable development and environmental preservation. »

According to the Chair of the Authority, this transition from an ECOWAS of States to an ECOWAS of Peoples, is based on the five pillars-the development of the region’s resources, peace and security, governance, economic and monetary integration and private sector growth.

President Issoufou noted that despite the prevailing integration challenges, he was looking forward to witnessing significant progress in the consolidation of democratic institutions, regional peace and security as well as the envisaged economic advancement of the region.

On the issue of monetary union, he stated that the harmonization and strengthening of the regional macroeconomic framework, particularly with the ECOWAS single currency project, remains a priority.

“The creation of the single currency in 2020 will be an important instrument for achieving the economic and political integration of our Region”. He added, while remarking that all Member States are strongly committed to achieving macroeconomic convergence in order to ensure the viability and credibility of the future monetary zone.

The Chair of the Authority also highlighted key areas deserving the full attention of the regional organisation. These included agriculture, free movement of goods and persons, the increment of intra-Community trade, regional education and health programmes as well as social and human development seeing that human capital is the basis of all economic and social development.

He further harped on the need for continuity of the Institutional Reform currently underway within ECOWAS Institutions in accordance with the timetable on order to make the institutions more efficient.

Earlier while welcoming the Chair of the Authority and the dignitaries, the President of the ECOWAS Commission H.E Jean-Claude Kassi Brou stated that he was delighted by the early-day indication given by President Mahamadou to the idea of accelerating major regional integration projects as part of the realization of the ECOWAS 2020 vision embodying a movement from an ECOWAS of States to an ECOWAS of Peoples. 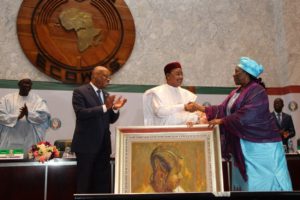 President Brou maintained that the Commission’s activities support the efforts of Member States in implementing their economic and social development programmes, thereby contributing to the consolidation of the region’s economic growth to over 3% in 2018.

Listing the challenges the region is confronted with, he emphasized the need to strengthen strategies to combat insecurity and extremism, increase socio-economic infrastructure, improve the free movement of goods and people, the operational implementation of the free trade area launched in Niamey on 8 July 2019, the creation of the West African Monetary Union, the implementation of programmes for industrialization, the development of agriculture and the need to urgently strengthen the capacities in training and healthcare provisions.

In order to respond to these challenges in a sustainable way, President Brou disclosed that commensurate action has already been initiated at the level of the various Departments while others are in their planning stages.

The working visit of the Chair of the Authority featured multifaceted discussions, technical sessions, a review of regional economic performance, an update of the political situation and upcoming elections, strides in peace and security and human development projections. There were also presentations, reviews and updates of the main ongoing projects of ECOWAS, eliciting questions and interventions by some heads of Institutions and agencies including ECOWAS Commission’s commissioners, under a robust atmosphere that allowed for clarity on some emerging issues.

In one of such instances, the Vice President of the ECOWAS Commission Madam Finda Koroma elaborated on the envisaged gains of the Commission’s human resources development programme through a human capital strategy designed to meet the health, education and entrepreneurship challenges of the region while the Speaker of the ECOWAS Parliament H.E. Moustapha Cisse Lo expressed appreciation to the Chair of Authority over the strides being made on the birth of single currency and the fight against irregular migration among others.

Also in attendance were the ambassadors of ECOWAS Member States, the Directors-General of some ECOWAS Agencies including the Representative of the ECOWAS Bank for Investment and Development, among others.