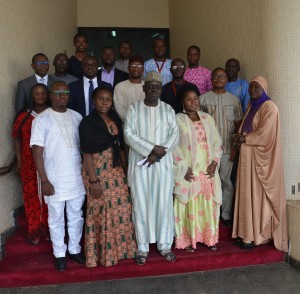 A group picture of participants

Representatives of Central Banks from Member States of the Economic Community of West African States (ECOWAS) have validated regional public debt and monetary statistics compilation tools in a 5-day workshop which ended on 29th March 2019 in Abuja, Nigeria.

This includes the methodology which will enable Member States compile regional statistics of ECOWAS macroeconomic accounts, government finance statistics, balance of payments as well as monetary and public debt statistics.

Upon the presentation of the ECOWAS monetary and debt statistics template as well as the interrelationships between macroeconomic accounts by the Commission, the Director for Research and Statistics, Mr. Mahamadou Yahaya who represented the Commissioner for Macro Economic Policy and Economic Research stated that the template will be used as a basis for the reporting of monetary statistics to the ECOWAS Commission.

This will enable ECOWAS Member States monitor the implementation of multilateral surveillance mechanisms on economics and financial policies as well as harmonize data processing.

The harmonized public debt platform was validated through the use of the International Monetary Fund’s Standardized Reporting Forms framework and after taking into account the West African Economic and Monetary Union’s (WAEMU) methodology and harmonization framework of its Member States.

The workshop served as a platform for Central Bankers from ECOWAS Member States to share the compilation processes of their monetary statistics.