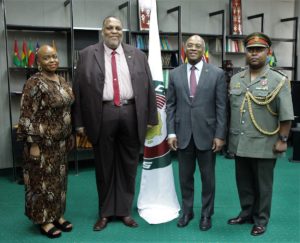 President Brou with High Commissioner Mseleku and his team

The President of the Commission of the Economic Community of West African States (ECOWAS) H.E Jean-Claude Kassi Brou has received letters of credence from the Heads of Diplomatic Missions of the United States of America (USA), The Republic of South Africa, Indonesia and Venezuela, on the 19th of February 2020 in Abuja, Nigeria.

At the ceremony which took place at the ECOWAS Commission Headquarters, the envoys were brought up to speed on specific programmes over which greater collaboration would be beneficial to citizens of the region. 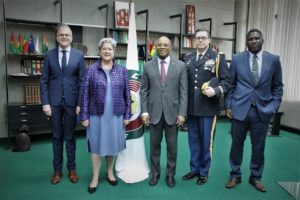 Conferring with the envoys separately after each had presented the assigned letters of credence, President Brou discussed more intense economic cooperation and synergy with the emissaries in the areas of peace and security, economic partnerships, trade and investment, (including the increment of foreign direct investments) agriculture as well as the deepening of governance issues.

Other areas of common interest highlighted during the exploratory discussions were in the field of medicine, direct flight interconnectivity, capacity building through scholarships, energy transformation assistance as well as the re-launching of cooperation framework of development where such is need. 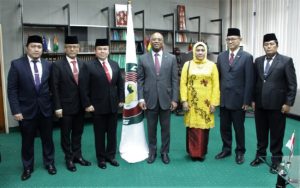 President Brou also expressed his satisfaction with bodies affiliated with the countries of some of the envoys such as the United Stated Development Agency (USAID) for the support being rendered to the ECOWAS integration programmes.

While giving assurances on the outlined integration programmes, the envoys individually pledged to make their engagement with the ECOWAS Commission count in a most beneficial way and to foster closer cooperation for the attainment of identified objectives